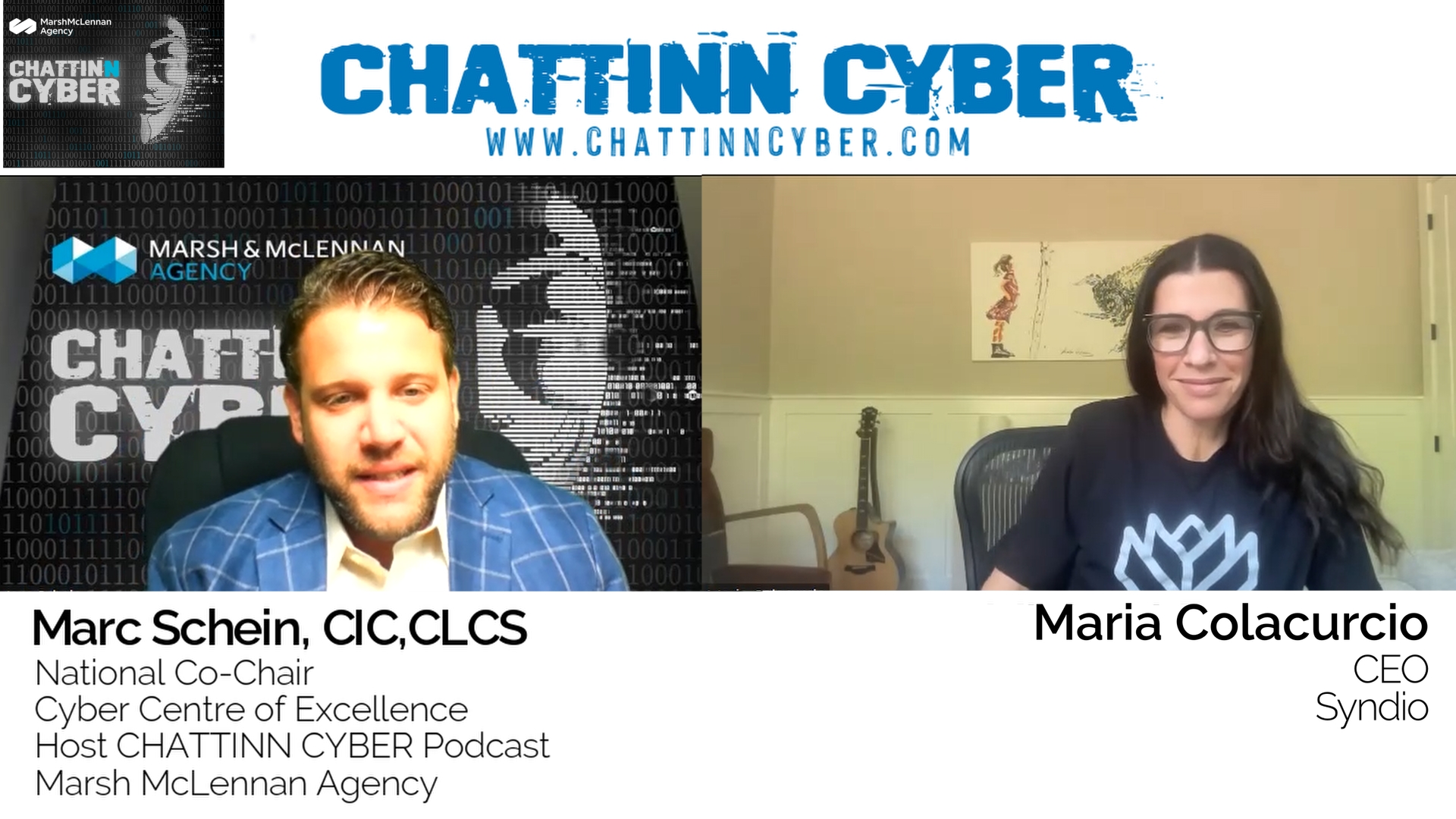 In this episode of CHATTIN CYBER, Marc Schein interviews Maria Colacurcio, CEO, Syndio, bringing pay equity in workplaces worldwide.
Maria talks about switching from her liberal arts background to enter the tech space and eventually finding her purpose in leading the movement for pay equity in companies.

A history and political science student, Maria’s entry into tech happened by chance when she met a woman at a dinner party at the height of the tech boom, who suggested she move from nonprofits to tech, and even got her a referral to a marketing role at her company. Maria grabbed the opportunity and worked in the marketing division for the National Museum of American History at the Smithsonian and has over time, switched jobs and moved to technological roles at companies.

At a point while she worked at Starbucks, the company was hyping about their pay equity announcement. Considering such things weren’t mainstream conversation back then, it meant a lot. While exploring more about it during that time, Maria got to know the Head of the Global Employment Law at Starbucks very well, and learned the way that a typical traditional pay equity analysis is done – it wasn’t good. She realized that not only was the system backward-looking and cumbersome, it also didn’t reveal anything about the behaviors or practices that drive the pay gap in the first place. Desiring to make it better, Maria tried to infuse software innovation with proactive research to bridge the pay gap in organizations. She shares that this research has taught her the importance of starting pay in bridging pay gaps – you’ve to make sure it’s done right to avoid pay disparities in the chain of employment roles.

Maria also talks about the rising awareness around ESG commitments, including the perspective of institutional investors from the ESG lens and how they’re trying hard to figure out what it means to have social ESG commitments as a company that has workplace equity embedded in the human capital. Another thing she talks about is how shareholder proposals requiring companies to disclose adjusted and unadjusted pay gaps have been featured in proxy season since 2015. As per statistics, 7 of the Fortune 100 companies face these pay gap disclosure proxies. And at 2 of these companies, it has succeeded. She also discusses pay transparency legislations that are forcing companies to post a good faith range for any new job position to avoid pay disparities.

There are two sides to pay equity – equal pay for equal work and the median pay gap. Our litigation is largely centered around the first and there’s a lot of legal risk to that. Companies also need to focus on the median pay gap, which is a reflection of opportunity – it’s the averages. In California’s SB 1162 – the legislation that just passed the California State Senate, it’s not just about pay transparency on job ranges.

It also includes disclosure of your median pay gap to the state and public reporting of your W2 earnings by EEO category. Companies need to do a full-body scan to adapt their practices to bridging the pay gap.
Towards the end of the conversation, Maria also shares actionable ways to implement equal pay opportunities at workplaces. Tune in to this episode to hear all about it!

Highlights:
“It was this crack in the door, which has been a real consistent theme in my career, seeing sort of a door cracked open, and then just being curious, having that intellectual curiosity to say, I wonder what wonder that leads, and then kicking it open.”“The Head of Global Employment Law at Starbucks, and I started talking about, ‘Is there a way to infuse innovation in software to make this something that is more proactive to make this something that looks at for example, starting pay is the biggest factor in any pay equity analysis?’. So how do you look at starting pay, make sure at that moment in the employee lifecycle that you’re getting it right so that you’re not having this consistent and ongoing backwards looking repeat have the same remediation over and over and over.”
“The median pay gap is really just a reflection of opportunity. It’s the averages. So do you have all of your men, for example, in the highly paid positions at your company? And why (though you may have really good gender diversity) are all your women sort of in the lower levels? If you had to disclose your median pay gap that would become very obvious to the outside world.”
Time-Stamps:
[00:37] – Maria’s early life and advent into the cyberspace [05:04] – Trends in the ESG space
[07:45] – What should companies do to ensure pay equity? [09:31] – Connect with Maria
Connect with Maria:
LinkedIn: https://www.linkedin.com/in/mcolacurcio/ 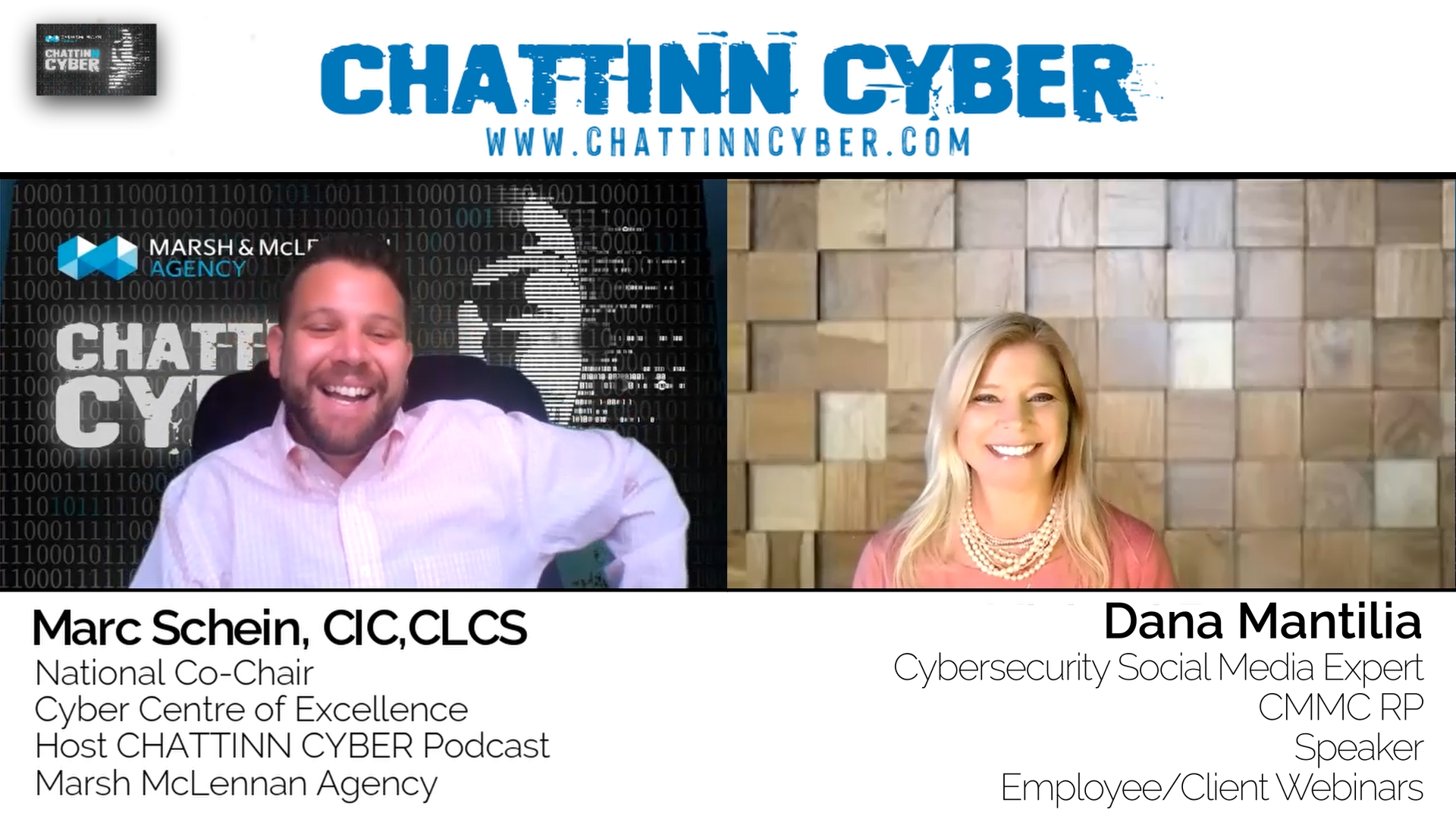 In this episode of CHATTIN CYBER, Marc Schein interviews Dana Mantilia, an online cybersecurity educator with an identity theft protection background. She discusses getting into the cybersecurity space, becoming a social media marketing and cybersecurity expert, and the challenges and opportunities in the industry.

Dana joined cybersecurity in the identity theft protection world in 2017, developing a product for the same (called Identron). Gradually, she realized the need and the lack of education in the industry. That was also when the idea of doing some LinkedIn videos about the same for educational purposes came to her. As she continued on the same, COVID happened; and with it, she introduced online training for non-technical employees and has since become one of the most marketed cybersecurity individuals in the US.

Dana moves on to discuss IT and cybersecurity. Addressing the gradual movement of IT professionals into cybersecurity, she explains that the two are still very different fields. She emphasizes that the two departments need to list their responsibilities and ensure they don’t get mixed up.

Discussing the importance of cybersecurity training for employees, Dana shares that it’s easy for cybercriminals to trick an employee into hacking a computer system; hence, training methods must be given importance. She adds that although some of the training can be handled with technology, a lot of it needs to be done in person to make employees remember it for longer.

Tune in to this episode for more learnings about cybersecurity and social media marketing from Dana!

“My thought process with cybersecurity is it’s still not being embraced by the private sector, just starting to be really held feet to the fire with the government side of things. So this is the time to really build their online presence over the next three to five years. And then when everybody is forced to embrace cybersecurity, they’re

“My videos are very short, very focused. And if I can I add a little bit of humor into them. And just hoping that people are going to remember what the point is that I was talking about in there.”

“One of the biggest problems is that the technical people that handle the cybersecurity aspect of things, they’re extremely intelligent people. But their communication skills, when it comes to speaking to somebody in layman’s terms, is not always there’s a disconnect there.”

[01:02] – From Connecticut to the most marketed cybersecurity individual in the US: Dana’s journey
[03:14] – What can cybersecurity folks do to help grow their network?
[05:32] – Why businesses must invest in cybersecurity training

[10:47] – The biggest challenges in dealing with non-technical cybersecurity people